This feature is designed to better utilize the resources on the content servers.  The task of decrypting and encrypting SSL requests and responses is "off-loaded" to the ARR server and the cycles saved by not performing such task can be spent on process additional user requests.

So, how do you configure SSL off-loading in ARR?  We will work on enhancing the user experience in later releases, but in CTP1, here is how you can do it.  As you may know, ARR relies on URL Rewrite module to inspect the incoming requests and determine which server group to route the requests based on the rewrite rules.  Given this, in order to route all traffic to the server group via HTTP, you can simply state this in the URL Rewrite module UI as shown below: 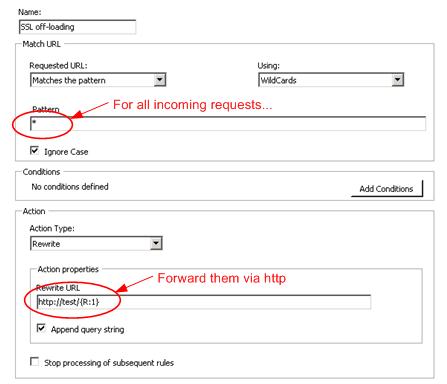 In some cases, though, you may not want to use SSL off-loading.  One such example would be if the applications on the content servers expect certain communications to be requested via SSL.  (If this is true, in most cases, appropriate changes are made to the applications so that SSL off-loading can be used.  For example, Windows Live ID - formally Passport ID - has specific APIs for enabling SSL off-loading.  However, this may not be possible in all situations.  For instance, it is possible that the deployment schedule of ARR is not aligned with the deployment schedule of the updated applications.)

First, we are going to determine if the request is made via SSL.  If so, it will forward the request to the content server via SSL: 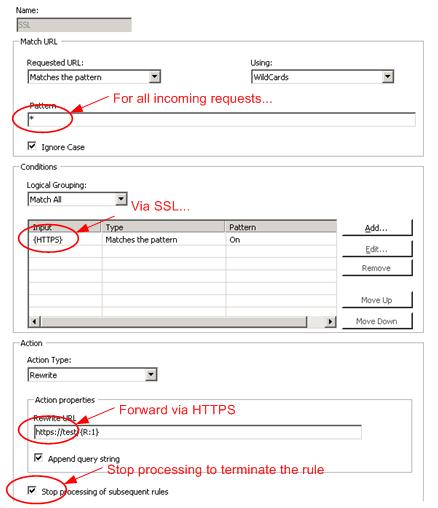 Note that the Stop processing of subsequent rules check box is selected.

Secondly, we are going to route the remaining requests via HTTP: 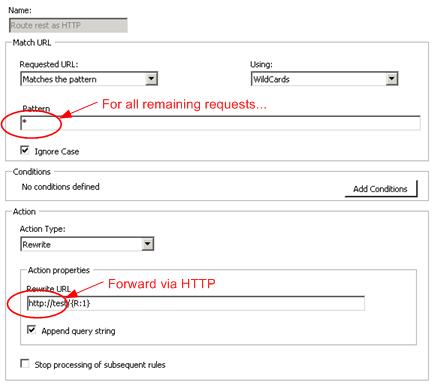