As most of you know by now, Application Request Routing (ARR) CTP1 was released in early July.  (Download x86 here and x64 here.  Support is available via this forum.)  ARR relies on the URL Rewrite module for inspecting the incoming HTTP requests and making the routing decisions based on the rewrite rules.  These two modules work together via an extensibility point in ARR and the same extensibility can be used for routing HTTP requests via other routing logic. 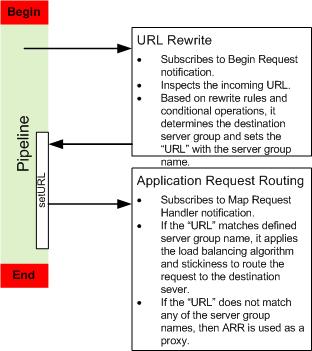 That said, ARR relies on an external module to determine which server group to route the HTTP requests to.  The URL Rewrite module is one such external module that can be used to determine the destination server group based on URL rewrite rules.  Other modules can be written, for example, to route the HTTP requests based on the user profile or geo approximity to the requested content resources.  Below is an example of how requests from a user may be routed to an appropriate OWA (Outlook Web Access) server based on where the user's mailbox is located:

The setURL is a native API and unfortunately, there is no managed equivalent API.   This means that the module that interacts with ARR in above scenarios must be written in native code.