For web server performance testing the Microsoft Web Capacity Analysis Tool (WCAT) is the tool of choice of the IIS team as well as the Windows Performance Team. Simple tests that hammer IIS with thousands of requests to the same HTTP page to very sophisticated web hosting and benchmark scenarios - there is nothing that WCAT can't do. Even on ApacheCon I heard some hard-core Apache guys talking about using WCAT for their performance tests.

WCAT is extremely versatile and can simulate thousands of concurrent users making requests to a single web site or multiple web sites.  The WCAT engine uses a simple script to define the set of HTTP requests to be played back to the web server. Extensibility is provided through plug-in DLLs and a simple API. WCAT is the best tool to hammer your web server with requests and make it really sweat.

Writing a WCAT script is not rocket science. However, writing a WCAT script to replay client requests is a lot of work because all hyperlinks and other resources have to be added manually. Lot's of typing… So I thought I write a Fiddler extension that does the work (download here). To use it is simple. Selecting a set of requests in the Fiddler UI and clicking the "Run WCAT script for selected sessions" in the context menu will do the trick. The WCAT Fiddler extension will then generate a WCAT script from the selected sessions and run the selected requests as a WCAT transaction against the configured server. Once the test is over it will show the results using the built-in reporting page. 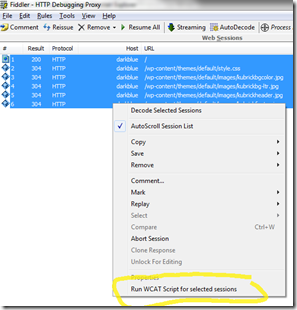 After you installed the WCAT Fiddler Extension you get two additional menu items in Fiddler. The first one is the "Configure WCAT Run" menu item in the "Tools" menu. 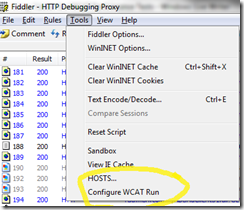 In the configuration dialog below you can configure the following: 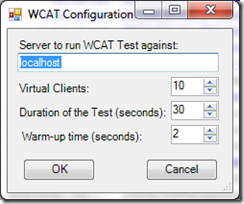 The second menu item is available in Fiddler's context menu.

The following happens if the menu "Run WCAT script for selected sessions" is clicked:

There is a lot of interesting data in the WCAT results page. The two most important are shown in the summary. Requests/sec is pretty obvious. "Transactions per Second" is not hard to understand either. The generated WCAT script puts the selected Fiddler sessions in a so-called transaction. WCAT executes all requests of a given transaction before it starts a new one. So "Transactions per Second" is the number of these selected Fiddler sessions that were handled per second. These two results give a rough ballpark figure how fast your web server runs. 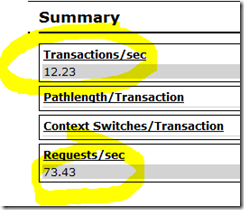 The results have to be taken with a grain of salt. There are many things to look at before these numbers will reflect the maximum of what your web server can handle. For example: