You may have noticed that there is an article about CPU Throttling in the What’s New in IIS 8.0 section of iis.net.  But didn’t IIS 7 support CPU throttling?  Indeed it did…but the way it is done in IIS 8 is much more effective and useful for sandboxing, and results in a better experience for users of your web site or application.  This post compares the CPU throttling approaches used in IIS 7 and IIS 8.

IIS 7 introduced support for CPU Throttling at an Application Pool level.  You could specify a limit of CPU usage and a corresponding action to take when that limit was exceeded.  The two available options were NoAction or KillW3wp.  The names accurately reflect what each option does: Doing nothing in the case of NoAction, or killing the worker process for KillW3wp.

Let’s take a look at what the KillW3wp option looks like in practice.

First, I will configure the DefaultAppPool with a limit of 10% CPU.  I have also set the Limit Interval to 1 minute to make it easier to demonstrate how the process is killed and then allowed to restart. 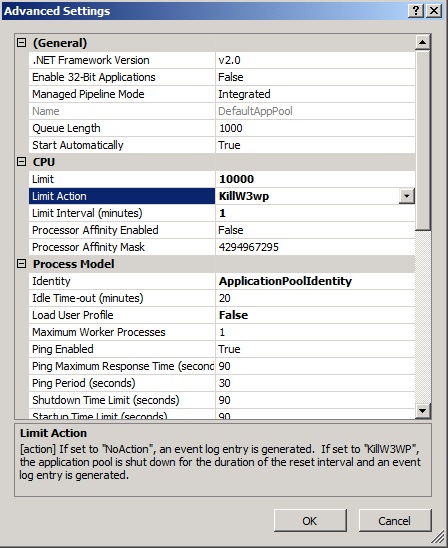 Next, I will apply load to the server using a load generation tool (WCAT, available for download here).

Here is how things look in the Performance Monitor: 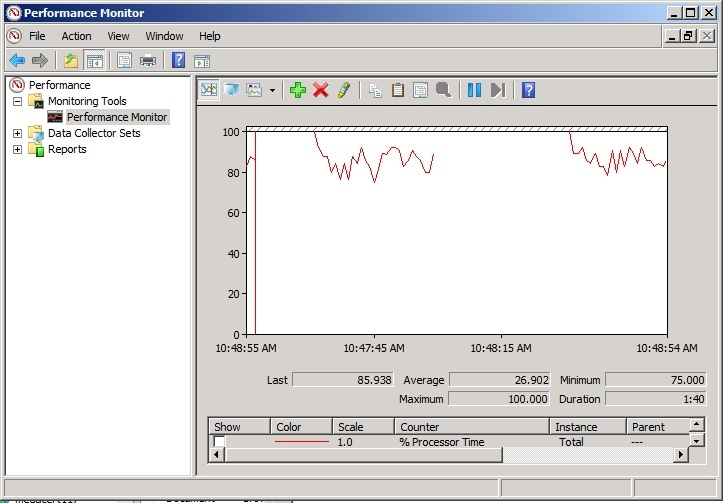 In IIS 8.0, we’ve worked closely with the Windows Kernel team to deliver a much better CPU throttling experience.  Unlike IIS 7 where the only solution was killing W3WP, in Windows 8 we have two additional throttling options: Throttle and ThrottleUnderLoad.  The Throttle option will always restrict the application to the specified amount of CPU utilization, while the ThrottleUnderLoad option will allow the process to use more than the specified amount of CPU, provided that there is no contention for CPU resources.

For this example we will use the Throttle option: 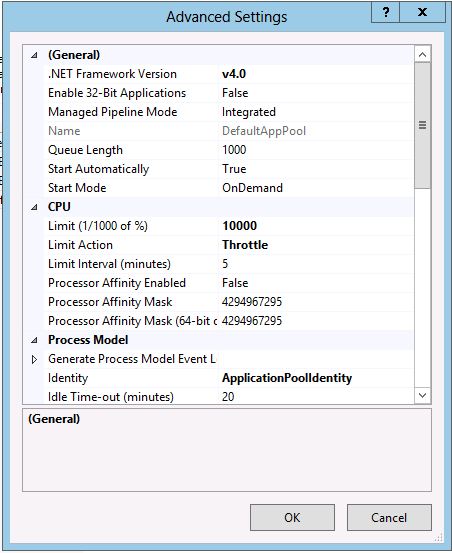 As with the IIS 7 scenario, I am using WCAT to apply load to the server.  Here is the CPU graph during the test: 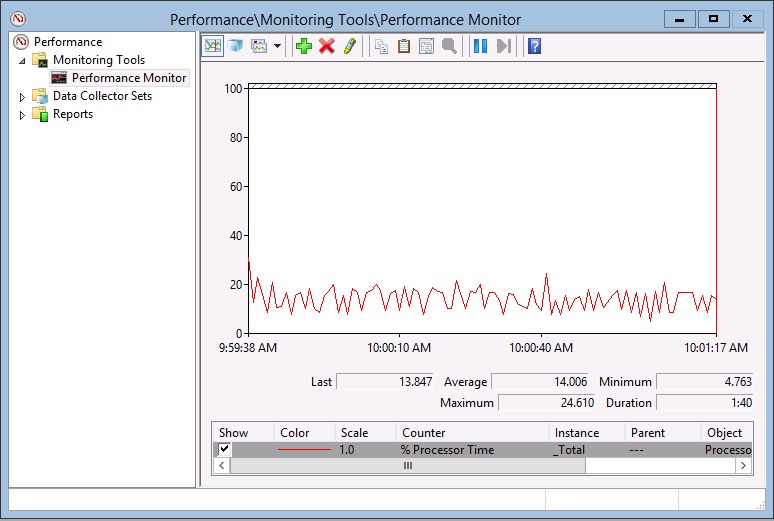 As you can see from the graph, the CPU utilization stays around 10% all the time, instead of climbing higher and having the process be killed like IIS 7.

Let’s try another example, using PHP this time.  As you know, PHP will use multiple processes for serving requests.  We will see that the CPU utilization stays near 10% even when multiple processes are running.  The sum of CPU usage for all of these processes will be limited to 10%.  Here is a view of Task Manager showing the FastCGI processes running when I put load on the system.  Note how the sum of all 5 processes is 10.4%.

In this post you’ve seen a comparison between the CPU throttling approaches in IIS 7 and IIS 8.  The investments in CPU throttling in IIS 8 provide a much better sandbox that you can use to limit CPU use by an application.

Shaun Eagan is a member of the IIS Program Management team. He works on many areas of the core web server, security features, SSL, manageability, the IIS process model and WebSockets. Shaun has worked at Microsoft for over 10 years, including four years as a developer in Microsoft Research, and six years as a Program Manager where he shipped products such as Office 2007, Office 2010, SharePoint 2010 and Office 365 prior to joining the IIS team.