This is another blog post that has been long due. I’ve written a lot about Live Smooth Streaming in my past blog posts but so far very few on On-Demand Smooth Streaming. Well, partially because getting On-Demand Smooth Streaming to work is quite simple. You just need to copy your content to the server and then everything should just work. For low volume usage, that’s pretty much all you need to care about. But if you are doing serious production systems with a large content library and significant client traffic, you would want to tune the system to its best performance in which case this blog post should be helpful to you. 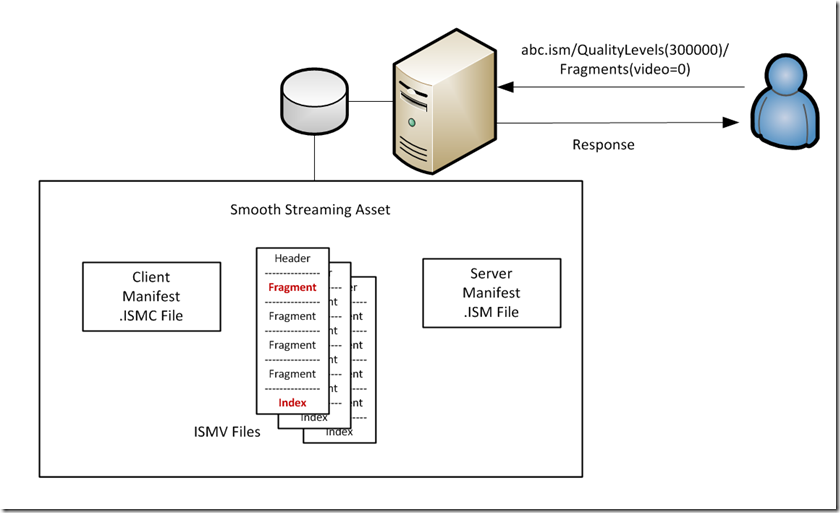 As you can see, the server logic is quite simple. For the most part, all it does is mapping incoming requests to sections in the media file and then serve them out. For most On-Demand Smooth Streaming deployments, the performance bottleneck is the disk I/O because the server needs to read a lot of media fragments and its logic is mostly dealing with disk read I/O with very minimum processing overhead. If we drill down into the disk I/O, in most cases, the majority of disk time is spent in seeking the disk head to locate the next fragment. This is especially true if you have a CDN which blocks most of the redundant requests which means the requests to the IIS Media server would be mostly random. As you may know, random I/O read is much slower than sequential I/O read for spindle-based disk storage.

So naturally, the performance tuning of On-Demand Smooth Streaming server is going to be mostly disk I/O related.

How do we improve the performance for On-Demand Smooth Streaming? – By doing lots of caching. We try to cache everything that could be cached to reduce disk I/O cost and improve performance. Here are the things that the server tries to cache:

So for the most part, performance tuning for On-Demand Smooth Streaming is all about tweaking these caching behavior through various configuration settings which will be discussed below.

Below is a table listing the available configuration settings for On-Demand Smooth Streaming in IIS Media Services 4.0 and 4.1 (“*” denotes new in 4.1). The configuration path to this section is “system.webServer/media/smoothStreaming”.

There is one more configuration setting that’s related to On-Demand Smooth Streaming server’s performance which lives under "system.webServer/media/common". It’s called "systemFileCacheRAMPercentageLimit" which is for setting the upper limit on how much physical memory (RAM), percentage wise, the operating system should use for file cache. The default value is 50% which could be a bit conservative for high end machines with more RAM. You can try to tweak this number higher to leverage more physical memory for file cache. This is a global setting for the machine.

If you compared the schema file of IIS Media Services and the table above, you might notice that I omitted a configuration element called “dynamicUNCResolution” (and its child settings) in the “system.webServer/media/smoothStreaming” section. This is a new feature we added in IIS Media Services 4.1 specifically for NAS (Network Attached Storage) scenarios where media content is accessed through UNC paths. The diagram below shows a typical configuration how this feature can be used. 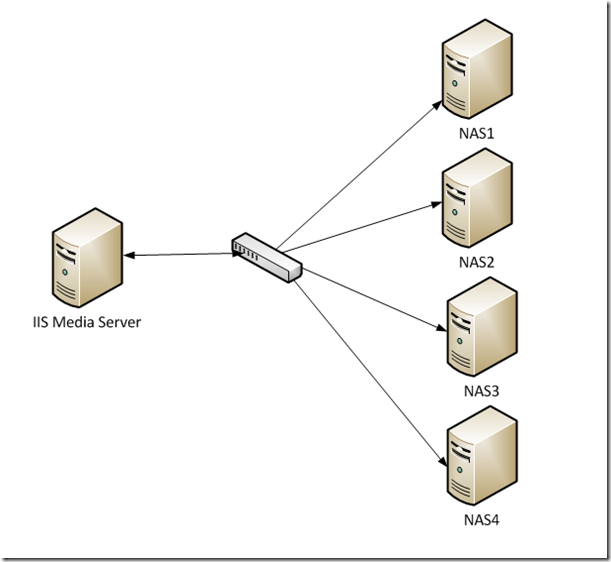 The idea of Dynamic UNC is that it allows the server to simultaneously leverage multiple NAS nodes for better I/O throughput while making it completely transparent to the client and IIS core pipeline (in terms of virtual directory settings).

Here is how to set it up:

After setting it up, you need to make sure that each of the NAS node has access to the same content library (either by copying the content to each NAS machine or having them be part of the same storage cluster).

This Dynamic UNC feature can be useful in many different ways:

The Dynamic UNC feature also has the capability to monitor the health of the NAS node and seamlessly re-route the traffic in case of node failure. Any node failure will also be reported through Windows Event Log. The “errorRetryIntervalMS” configuration setting can be used to instruct how frequently the server should check the status of each NAS node. When a node failure happens, server would first mark the failed node “unhealthy” and immediately re-route the traffic to other nodes (supported in both CARP and Round-robin mode). Server also has logic to periodically retry the failed node to see if it went back up in which case it would put the node back into the workgroup again. So everything you need for a simple failover/recovery scenario should be automatically handled.

As you can see, getting a On-Demand Smooth Streaming server to work is not difficult, but making it work really well with the best possible performance requires a lot more thinking and tuning. In IIS Media Services 4.1, we did a lot of work to push the server performance further with more configuration settings for fine tuning. We also put a lot of effort in better NAS integration which allows IIS Media Services to run much more efficiently in those environment. In some of the real world deployments, we saw the overall server throughput increased by multiple folds with NAS clusters.

As usual, I hope this blog is helpful to you. Please go ahead and download the latest IIS Media Services 4.1 release and let us know what you think.