If you didn't think that processing XML on the server side can lead to a Denial of Service, Information Disclosure or even Remote Code Execution, read on. The issues discussed here are include a class of issues that is commonly referred to as XML External Entity vulnerabilities (XXE), but are not limited to this. If you are NOT processing untrusted XML and the data comes from a trusted source this article doesn’t really apply for you but is still good to enforce safe usage for hygiene.

Most would consider XML as simple markup data, but you should actually consider it a ‘language’ that actually has powerful runtime features. These runtime features could be enabled on the server-side even if their use is not intended, and this is what unwittingly leads to XML based vulnerabilities on the server side. Following are a few of the classes of issues you could run into with XML processing.

During XML pre-processing, this XML would essentially become

But we can go further and define entities that reference other entities, like

So now the XML pre-processor has to go through multiple stages of entity expansion. 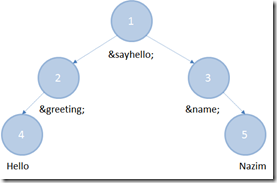 You have probably put 2 and 2 together at this point and see the issue already. Since this is essentially a tree structure, I can grow the number of nodes to pre-process exponentially. So something like the doc below even though small in size (<1KB) will expand out to a billion lols and can take up almost 3GB in memory. This is commonly referred to as the billion laughs attack and you can read more about it in this MSDN article.

Entity expansion is not limited to string literals though. It could very well refer to external data like the example below.

If this document is somehow reflected back to the client it would result in disclosing information on the server that a client wouldn’t have access to.

I think this is best shown by directly diving into an example.

Here we have an XML style sheet that essentially has some code that is run as part of applying the style sheet. Imaging replacing the code highlighted with a payload of your choice, including things like a network scan :)

You essentially want to disable <!DOCTYPE> definitions (DTDs) when parsing untrusted XML. There are many APIs, that are not safe by default in this respect and you need to explicitly disable DTD resolution on an XML document. See below for API specifics.

This is pretty much the same as above and you want to disable DTD and XSL script support. See below for unsafe API specifics.

The list below was accurate at the time this article was compiled. It is possible that updates to components may have changed the defaults, so it is always better to test your usage.