I am very pleased to announce the final release of Application Request Routing (ARR) 2.0, which provides a powerful load balancer and caching solution for free download onto Windows Server 2008 or Windows Server 2008 R2. As with all the IIS Web server extensions, ARR is built by the same engineering team that brings you the IIS Web server, fully supported by Microsoft Customer Support, and will soon be localized in French, Spanish, Russian, Korean, Chinese Traditional, Chinese Simplified, Spanish, German, and Japanese.

Once you download ARR (use Web Platform Installer for an easy install), you will see a new node called “Server Farms” appear in the left tree-view  of our IIS Manager administration console.  With ARR, we are adding Server Farms as an IIS Web server concept on the same level as Sites, Servers, and App Pools. ARR gives you the ability to load requests, monitor and manage servers and requests, set up proxying services, establish routing rules (using our URL Rewrite extension) and set up affinity relationships between servers and requests. 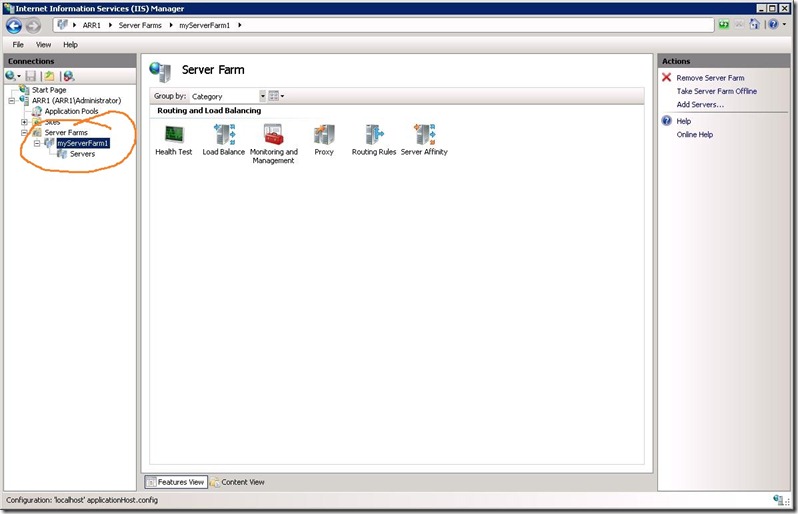 One of the innovative Web hosting providers that we work with, MaximumASP, has rolled out a new service called MAXEsp which provides high availability for shared hosting using ARR on top of Windows Server 2008 R2. This type of new offer is exactly what we like to see being built on our IIS platform of Web server + Web server extensions –-- customers either making money or saving money using Windows Server 2008 or later with IIS 7.x and our library of Web extensions.

In this second version of ARR, we introduce support for managing cache hierarchies, which is a requirement for ARR to  manage requests in the data centers for Content Delivery Networks (like Akamai). ARR is an integral part of the IIS media hosting platform for high definition media delivery over HTTP. We introduce the ability for ARR v2 to be used on the edge of the network either as a parent node or a child caching node in a data center that can be geographically distributed. Pretty powerful stuff – and it’s free on Windows Server 2008 or later, fully supported by Microsoft and coming soon in 9 languages for international customers.

To learn more about ARR, check out these blogs: