A term often expressed at the end of a journey is "its been a great ride."  I can't argue or complain with that expression as it is exactly how I feel after 7 years of fun at Microsoft.  The loose ends to tie up after this amount of time is vast so please do accept my apology for making a blog post one of the last things I did.

My career has taken me down various paths and along the way I have made hundreds of friends.  They will be missed.

My Microsoft Career in a Snapshot

It is pretty straight forward.  At the center of my universe was IIS back when it was in version 4 while v5 was just about to hit the door.  I lived through the bad times - Code Red & Nimda - and many good times as we watched one happy customer after another deploy IIS 6.0.  I then spent time watching IIS 7.0 in it's infant stages to where it is basically complete and the next generation Web platform.

In either event, here were my roles:

During IIS Product Unit tenure, here are some quick facts:

The one thing that many folks do while reflecting on a "career" at a place is think about the things they did.  Beyond that, they think about the things they also didn't do...As a quick glimpse, I thought I might share what are some of the things I am most proud of while working at Microsoft.  A discussion of the things I could have done better (or worse) then check out my new blog location.  I will also be talking a bit more about my experiences at MS that might answer the question you might ask...why would you leave?

I left Microsoft officially on Monday, July 16th.  A great deal of folks found it odd that I chose Monday rather than the traditional Friday but I felt like I had good reason.  Friday, well... it was Friday the 13th.  I didn't want to tempt fate and throw caution to the wind and leave on this well-publicized Americanized bad day.  On Monday, I came to work for my final day to find that my buddies which I will miss dearly did me one final farewell.  It was sad while all along very funny.  I have been known over the years as they guy who carries a football to meetings, to the guy who talks funny (southern accent), and lastly to the guy who would usually have a well-stocked beer fridge in his office.  My leaving posed a serious threat to some on the team who find the ability to grab a beer during the day to chase away the daily Microsoft blues very appealing...

They blocked it - and did so in great fashion. 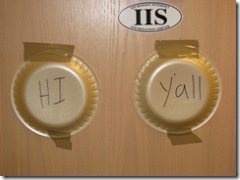 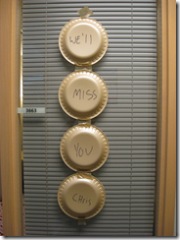 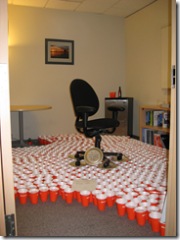 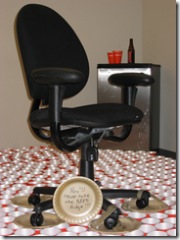 Lets just say that I will you y'all too.