You can then get started quickly using one of the rule templates available in URL Rewrite, or import your existing rules from .htaccess. 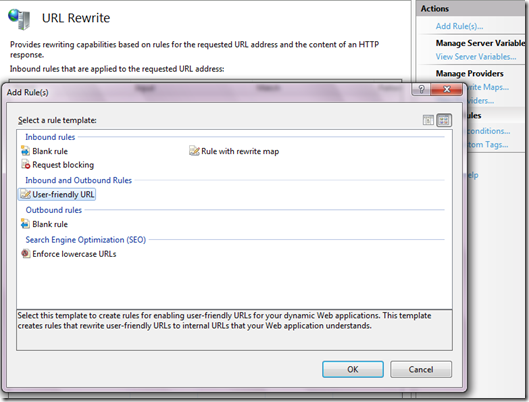 We began the URL Rewrite development project two years ago to bring dynamic rewriting to the Windows platform. We wanted to support the same scenarios as mod_rewrite, but also provide a simplified workflow and more powerful functionality to simplify how to work with rewrite rules.

More specifically, URL Rewrite 2.0 can be used to:

You can download and install IIS URL Rewrite 2.0 by using the links on the URL Rewrite home page: http://www.iis.net/expand/URLRewrite. For the complete list of features available in this version, including the extensibility functionality,check out the Using URL Rewrite Module 2.0 article.

We hope you like the URL Rewrite 2.0 server extension – as with all our IIS server extensions and tools, it is free on Windows Server 2008 and later and fully supported by Microsoft.